EMDR is a breakthrough therapy that can bring quick and lasting relief for most types of emotional distress including trauma, anxiety, panic, PTSD and more.

A traumatic event is any experience in which a person is exposed to, or witnesses, a threatening or harmful event, and experiences strong negative emotions or helplessness. Examples include rape, sexual assault, domestic violence, being in or witnessing a holdup or motor vehicle accident, witnessing an unexpected or violent death, being in a natural disaster or being caught up in conflicts or war. Other traumatic events are more personal. They include public ridicule, performing badly in front of one’s peers, critical put downs by parents or others, and any form of emotional abuse.

Although some people might not call these events “traumatic”, because they can be associated with a high level of emotional distress, the brain treats them in exactly the same way. The emotions and bodily reactions at the time of the traumatic event are associated with chemicals in the nervous system, including adrenaline, and these cause the brain to store or encode the traumatic experience in a manner different from an everyday event which doesn’t carry a strong emotional charge.

So how does a “Traumatic Memory” differ from a normal memory?

We can think of the memory of a traumatic event as consisting of three components. We can distinguish the sensory memory, the emotional memory, and its meaning.

The sensory memory is stored in the sensory cortex of the brain, where the details of sight, sound, smell, etc. are encoded. There are many different sensory elements which make up a traumatic event, and our recollection of a recent trauma often consists of sensory fragments of the event, rather than a complete and coherent memory. A traumatic memory is vivid and often detailed in some aspects but lacking detail in others. For example, a person in a holdup may recall the detail of the weapon, but not recall what the robber was wearing. Whereas non-traumatic memories generally fade over time, losing their vividness and detail, traumatic memories are recalled with vividness, and a sense of being present (“I remember it just like it was yesterday.”). Non-traumatic memories are recalled with a clear sense of being in the past. Traumatic memories are experienced as flashbacks, disturbing dreams, or a sudden sense of re-living the event.

A person may experience a general sense of over-arousal, in the form of increased irritability, sleep disturbance, concentration difficulties, being easily startled, and being on guard. The person’s mind may try to distance the emotional component of a traumatic memory by a process called “dissociation”, which may be experienced as a sense of emotional numbness.

Some time after the trauma occurs the third component is formed in yet another part of the brain, the pre-frontal lobes. This third component of the traumatic memory is the meaning that the event has for the person. These are not the thoughts we had at the time of the trauma, it is the meaning that that event has afterwards. This is then applied to other situations subsequent to the traumatic event, triggering emotional and behavioral reactions long after the original traumatic event.

How does EMDR Therapy help to resolve trauma?

Therapists help people resolve trauma by creating a safe environment in which the experience of the traumatic event can be shared, and it’s meaning explored. Talking about the trauma can be difficult initially, if the person often has tried to avoid the trauma memory. While avoidance does help in the short term, much research has shown that it can make the avoided memory even more distressing. In the end, avoidance strategies are not helpful, and this has long been recognized. There is an old African proverb that says “You can outrun the lion that is chasing you. You cannot outrun the lion in your head.” Trauma memories are like lions in your head. Trauma therapy is about facing and taming those lions.

Eye Movement Desensitization and Reprocessing (EMDR) therapy is an integrative psychotherapy approach that has been extensively researched and proven effective for the treatment of trauma. No one knows how any form of psychotherapy works neurobiologically or in the brain. However, we do know that when a person is very upset, their brain cannot process information as it does ordinarily. EMDR works by processing those traumatic memories that have a lasting negative effect and interfere with the way a person sees the world and the way they relate to other people. EMDR has been very successful in helping people who suffer from trauma, anxiety, panic, disturbing memories, post traumatic stress and many other emotional problems. Until recently, these conditions were difficult and time-consuming to treat. EMDR is considered a breakthrough therapy because of its simplicity and the fact that it can bring quick and lasting relief for most types of emotional distress.

EMDR therapy uses bilateral stimulation, right/left eye movement, or tactile stimulation, which repeatedly activates the opposite sides of the brain, releasing emotional experiences that are “trapped” in the nervous system. This assists the neurophysiological system, the basis of the mind/body connection, to free itself of blockages and reconnect itself. As troubling images and feelings are processed by the brain via the eye-movement patterns of EMDR, resolution of the issues and a more peaceful state are achieved. 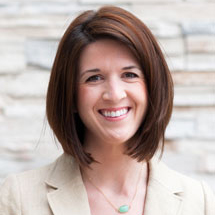 Anna has had a passion for listening to others life stories as long as she can remember. She believes that everyone knows their own direction in life, but occasionally everyone needs a guide. That guide may sometimes be there to just hold a little light on the path or to help point out bumps you can’t see. You may need a guide as you enter new transitions in your life or to help you through the long stagnant stretches. Either way having someone with you on your journey can help you to understand yourself and your path from a different perspective. Anna is EMDR certified and has a trauma informed focus.